I first encountered Albers’ Interaction of Color as an undergraduate student at the Slade School of Fine Art, in London, U.K. The Slade had one of the original sets of screen prints that accompanied the first edition, so I spent hours poring over the prints and marveling at the mutability of color. Years later, when I was asked to teach a Color class at the School of the Art Institute of Chicago, I knew that I wanted to build the course around the exercises in the Interaction of Color. These exercises demand precision and patience, but also teach us how to see, and how to make color do things. Previous students have described my color course as invaluable; rigorous but also rewarding; and something every artist should learn. Originally published in 1963, Albers’ approach to color theory still feels relevant today because he places the importance of practice before theory. In doing this, he created one of the best manuals for any visual artist hoping to better understand the role that color plays within their work.

In his introduction to Interaction of Color, Albers writes:

“In order to use color effectively it is necessary to recognizethat color deceives continually.To this end, the beginning is not a study of color systems.

First it should be learned that one and the same color evokesinnumerable readings.Instead of mechanically applying or merely implying laws and rulesof color harmony, distinct color effects are produced- through recognition of the interaction of color -by making, for instance,2 very different colors look alike, or nearly alike.
The aim of such study is to develop – through experience-  by trial and error – an eye for color.This means, specifically, seeing color actionas well as feeling color relatedness.

As a general training it means development of observation and articulation.
This book, therefore, does not follow an academic conceptionof “theory and practice.”It reverses this order and places practice before theory,which, after all, is the conclusion of practice.”[i]

Albers began as a student at the Bauhaus in 1920, and became a professor at Bauhaus Dessau in 1925. Consisting of workshops including weaving, glass and mural painting, metal, building theory, plastic arts, fine arts, ceramics and more, the Bauhaus is often looked at as a model for contemporary art and design schools, and its ethos is still felt today. While at the Bauhaus, Albers taught the Vorkurs (preliminary course) and worked with stained glass and furniture design. After emigrating to the U.S. in 1933 with his wife and fellow artist Anni Albers, Josef taught at Black Mountain College and then became the head of the department of design at Yale, where he developed the Interaction of Color with the help of his students.

His body of work Homage to the Square was begun in 1949, and continued until his death in 1976. In these rigorous and stunning paintings, we can see Albers putting into action many of the principles of color and vision laid out in the Interaction of Color. That these paintings started before his book was created, and continued long after, indicates the complexity of color and the infinite possibilities that can unfold within strict parameters.

Details for upcoming ‘The Art and Science of Color’ workshop. 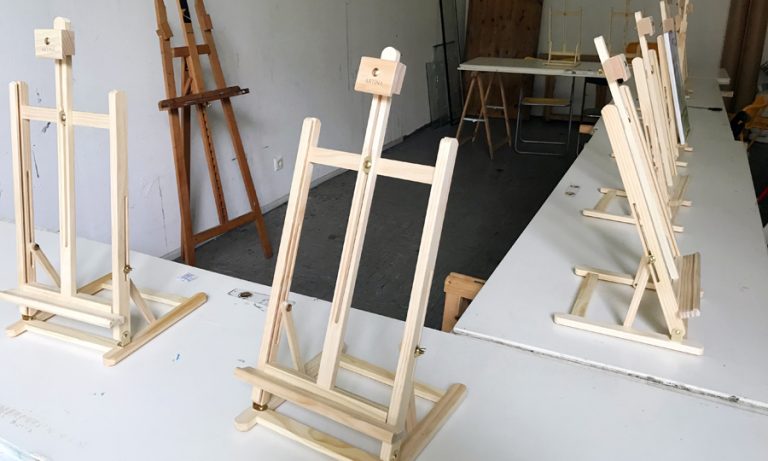 Artists throughout history have used monsters and mythological creatures to explore their inner worlds and experiment in a free and expressive way. by Heidy Weingartner Monsters have been popular mythical…

I am excited to officially announce a new collaboration with the Natural History Museum of Berlin; something that has been in the ‘planning and development’ phase for over a year now….

Looking for a creative way to start off you Hen/ Stag Party weekend in Berlin? Look no further! Life Drawing Parties at the Berlin Drawing Room are a fun and creative…